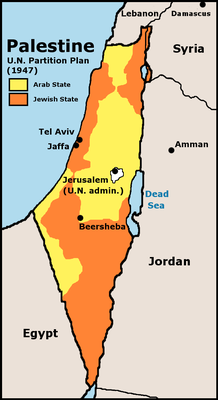 The UN partition plan of 1947 stipulated the division of Palestine into a Jewish and an Arab state while Greater Jerusalem was to be put under international control. As had happened with the Peel Commission's proposal in 1937, this plan was also accepted by the majority of the Yishuv and rejected by the Arab states, which led to its failure.