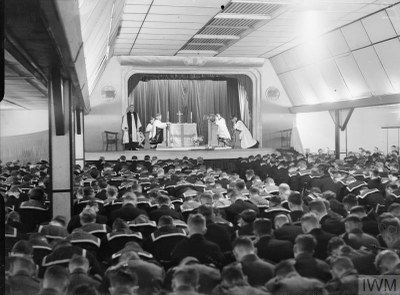 William Temple (1881–1944) became Archbishop of Canterbury in 1942 (and remained so until his death in 1944) after holding offices as Bishop of Manchester (1921–1929) and Archbishop of York (1929–1942). He was instrumental in the establishment of the World Council of Churches and in supporting the ecumenical movement and social reform in Great Britain. The picture shows him in 1942 at a service in front of Royal Navy soldiers on the Orkney Islands.

The Archbishop of Canterbury conducts a service in the cinema at Flotta on Orkney during his visit to the Home Fleet at Scapa Flow, September 6, 1942, black-and-white photography, 1942, photographer: Hudson, F A (Lt), Royal Navy official photographer; image source: Imperial War Museum, © IWM (A 11549), IWM non-commercial license.