Cyril and Method in Vienna 1775 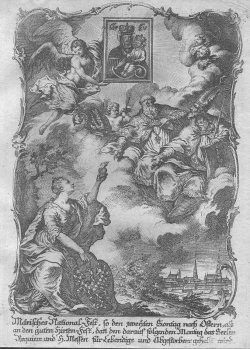 The two brothers, born in Thessaloniki and later known as Saint Cyril (827–869) and Saint Method (ca. 816–885), were sent as priests and missionaries to the region between Dnieper and Volga, where they spread the Christian religion. As part of their joint translation of the Bible into the Slavic language, Cyril developed the Glagolitic script. The Cyrillic script, which brought together the Glagolitic script with the Greek alphabet in the 10th century and then replaced it, was however not invented by Cyrillic, but presumably by the Bulgarian Kliment Ochridski (ca. 840–916).
It is still used in its modernized form in Russia, Belarus, Ukraine, Bulgaria and Serbia, among other places. Cyril and Method later became heroes of the pan-Slavic movement. The illustration here of the Moravian National Festival 1775, for instance, depicts the brothers hovering on a cloud above the city of Vienna.