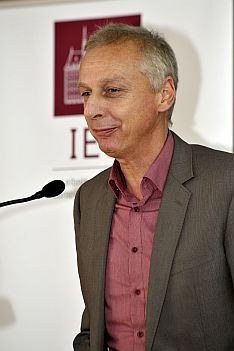 Professor Helmuth Trischler, Director of the area "research", German Museum, Munich. EGO editor for the history of technology and science.

The central aim of EGO is the "interdisciplinary interconnection of international research on European history", and EGO is aimed at a diverse "readership in various disciplines". In short, EGO is conceived as an interdisciplinary project.

Applying this distinction, EGO is more of a multidisciplinary, than an interdisciplinary project, the aim of which is to establish a transcultural, multi-perspective history of Europe on the internet. Bearing in mind the central question referred to above, "multi-perspective" means that all the specific perspectives of the disciplines relevant to research on European history are mobilised.

To what extent has the project succeeded in this? I must admit that I have not taken the time to evaluate all the articles in EGO. Let us look instead at the disciplinary backgrounds of the specialist editors on the basis of the reasonable assumption that these editors primarily drew on their own respective disciplinary networks in the search for authors. The 22 current and five former editors belong to the following disciplinary fields, with some belonging to multiple fields:
history / historical studies: 22;
literary studies and linguistics: 4;
theology: 5;
art history, philosophy: 2;
musicology, legal studies, ethnology, media studies: 1.

Two facts stand out. Firstly, the overwhelming preponderance of representatives of the discipline of history is conspicuous, though the varied spectrum of historical subdisciplines – including economic and social history, the history of science, medicine and technology, cultural and gender history, political history and history of society, as well as migration history – is well covered. What else could one legitimately expect from a project, the subject of which is European history?

Secondly, the dominance of the humanities is conspicuous. Except for media studies, the social sciences are not represented at all. Sociology, political science, psychology and economics do not feature. And, in particular, the natural sciences, the life sciences and engineering are absent. Incorporating experts from the social sciences, natural sciences and engineering disciplines obviously proved beyond the disciplinary and interdisciplinary limits of the European History Online project with its focus on history and the humanities.

If we delve more deeply into EGO by looking at the specialist articles, then the picture becomes a little more nuanced. As regards the areas of "science and education" and "science and technology", which I represent, a small number of representatives of the disciplines of the natural sciences and technology can be identified, or at least representatives whose academic expertise can be combined with historical research perspectives and questions. Two examples: The article Historical Climatology of Central Europe is by the Freiburg geographer and climate researcher Rüdiger Glaser, and the architect and philosopher Carsten Ruhl was persuaded to contribute the article Palladianism: From the Italian Villa to International Architecture. Both authors were very successful in placing the specific knowledge of their disciplines in broad historical contexts by applying the main perspectives of the discipline of history.

Let us therefore conclude in relation to the initial question regarding the interdisciplinary scope of EGO that – for a project that has history as its subject – EGO does indeed have a broad multidisciplinary profile. While EGO aggregates, rather than integrates the perspectives and knowledge of the participating disciplines, this is more than one can legitimately expect from a project in which so many authors participate. Does EGO utilize this profile in the way it portrays itself, and does it make this profile transparent to its users? The answer here is clearly no. The users are told nothing about the disciplinary backgrounds and specialisations of the authors. They have to research this themselves. This is a significant omission given that it is important in the context of academic transparency to know from which of the many perspectives encompassed by the EGO project the respective article is written.

Is EGO a transdisciplinary project?

In search of an answer to this question, it must first be noted that EGO itself does not make any claims in this regard. I suspect that this may be because the initiators and those responsible for the implementation of the project viewed transdisciplinarity as just an additional variety of interdisciplinary and multidisciplinary research. However, our discussion should be based on an understanding of transdisciplinarity as the principle of integrative research which connects academia with society and academic knowledge with practical everyday knowledge. Transdisciplinarity in this sense does not take academic approaches and discourses as its sole point of reference, but is transitive to the extent that it goes beyond these and ties in with society, or, as the philosopher Jürgen Mittelstraß put it: "Transdisciplinarity [is] an academic and research principle which becomes operative in instances where a purely specialist or disciplinary definition of the problems and the solutions is not possible or such definitions have been superseded."2 Transdisciplinarity in this sense also specifically implies the integration of society into an open and transparent dialogue and weighing the different perspectives on a subject against each other.

How could EGO be designed as a transdisciplinary project? EGO as a transdisciplinary project could mean, for example, that the conceptual design of the project, particularly the choice of topics, is discussed in a dialogue with selected representatives of the public instead of being decided on by the specialist editors. It is very conceivable that such a – "socially robust" in Helga Nowotny’s sense of the term – design would deviate from that which is now on the internet.3

EGO as a transdisciplinary project could also mean utilizing the specific advantages of EGO as a digital project to make it participatory and dialogic – through the use of comment threads and through the use of the social media in particular. The creation of such an interactive dialogic space would of course require vast resources. I merely note here that EGO does not fulfil this definition of transdisciplinarity, indeed it cannot fulfil it in view of its entire basic design.

The possibilities which a dialogic orientation can offer are demonstrated, for example, by the project "Inventing Europe", which also has the aim of establishing an online history of Europe. The project emerged from the research network "Tensions of Europe", which has been funded by the "European Science Foundation" (ESF) and other research funds and which will culminate in the publication through Palgrave Macmillan in 2014/15 of the six-volume series entitled Making Europe: Technology and Transformations, 1850–2000.4 Parallel to this, ten European research museums and cultural institutes have joined forces under the leadership of the "Foundation for the History of Technology" in Eindhoven in order to establish a shared website on European cultural heritage in the area of science and technology.5 The website, which went live in 2011, offers virtual online exhibitions also used in university teaching as well as enabling users to write their own histories by accessing the collections of the participating institutions. In this way, European history becomes an interactive project which literally incorporates broader society in a transdisciplinary way.

Mittelstraß, Jürgen: Transdisziplinarität oder: Von der schwachen zur starken Interdisziplinarität, in: Gegenworte 28 (2012), pp. 11–13, here p. 12. This is in contrast to the definition of transdisciplinarity as a univeral theoretical unitary principle; on this, see Nicolescu, Basarab: Manifesto of Transdisciplinarity, Albany, NY 2002