von by EGO-Redaktion Original in German, angezeigt indisplayed in English▾
The Media and Media Events 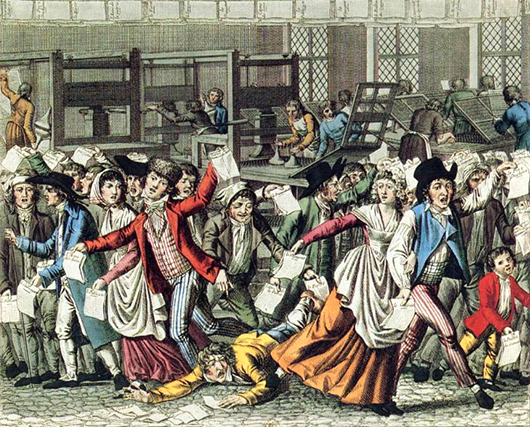 Alongside people, media – understood here as technologies that served the mass diffusion of information to a large number of recipients – were and are the most important agents of communication and transfer. More than this, media not only complemented but also increasingly outstripped the direct communication between individuals and the transfers via travellers and migrants. The articles in this thread investigate the roles which media have played as mediators of content in the multifarious processes of exchange between national, regional and social spheres and how they changed these subjects. They present the various types of media as transmitters in transfer processes and depict their historical development. This thread emphasises the European media events, i.e. key events, which provoked debates that gripped entire societies and (more or less) spread throughout Europe. These events took place in almost all media and tended towards "reporting the reporting". As the nodal points of a network of intense communication, they enable insights into the forms and strategies of communication – and thus into the mechanisms of intercultural transfer and the formation of transnational spaces of communication. Articles on media events from the Wittenberg Reformation to the Second World War, from natural catastrophes to revolutions, show how communication developed and changed. Not least, they shed new light on the question of how "European" these media events really were.

The survey article European Media Events offers an introduction to this thread. It defines the concept "media event" and depicts its development from the early modern period to the present. At the same time, it investigates how political conditions and the development of new technologies influenced the treatment of events in the media – thus, for example, the media impact of the Reformation was, amongst other factors, fundamentally shaped by the invention of moveable-type printing. In addition, one of the guiding questions of this thread is also the extent to which a collective experience of media events influenced the development of a European consciousness. Further articles deal with individual media events. For example, the French Revolution, as a key occurrence in European history, is presented as being shaped by the media in two respects: on the one hand, it was the result of an unprecedented explosion in the textual, visual and oral media; on the other, knowledge of the spectacular developments of the revolution was rapidly disseminated through Europe by newspapers, caricatures and songs. The article investigates what transfer processes arose as a result of this media diffusion: how, for example, public celebrations and theatrical performances in numerous German cities celebrated the first anniversary of the storming of the Bastille with the goal of strengthening German patriotism in imitation of the French example.