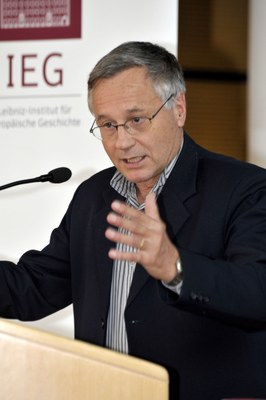 Dr Marco Jorio, chief managing editor, "Historisches Lexikon der Schweiz" (HLS), Bern.
"History writing is a function of latitude and longitude!"
This was how Professor Heribert Raab, who had studied at Mainz, emphasized the location-dependent nature of history writing to us as first-year students at the University of Fribourg in Switzerland. According to this view national origin and cultural and linguistic background determine historiography. From this perspective, the ambitious plan of writing a European history must either fail or result in a collection of national and cultural narrow focuses. However, your successful project proves that this need not be the case, as does the Historisches Lexikon der Schweiz (HLS). Nevertheless, we (in the HLS project) were confronted with the question of how to escape the trap of national and cultural restrictions in a transnational and intercultural project. Lászlo Kontler's commentary demonstrates that this was – and is – also the case in the EGO project. Based on the nationalities of the members of the editorial board and the locations where the articles were produced, he concludes: "The most conspicuous impression is an apparent preponderance of German and Germanophone scholarship in the realization of the project". He implies in this statement – without elaborating further – that EGO has a strong Germanophone orientation, or, to put it negatively, EGO has not yet fully realised its supranational, trans-European goal. A more detailed analysis would be necessary to establish whether this limitation is actually a feature of EGO. A cursory look through this massive work confirms that EGO definitely has European history as its subject. And as the nationality and native language of an author is not actually an obstacle to a trans-European perspective, Lászlo Kontler's observation is not necessarily pertinent. But a number of peculiarities and instances of narrowness of focus become apparent even during a quick look through EGO. For example, the article on the Waldensians limits its discussion of their confessional migration to the period 1699–1823 and geographically to South-Western Germany. One would have expected a somewhat broader depiction of Waldensian migration. EGO is (correctly) not intended to be a comprehensive encyclopaedia of European history, but the topics dealt with should, in my view, be dealt with in a comprehensive and trans-European manner.

The problem of "latitude and longitude" is also familiar to all of us involved in the HLS. We are not operating on the very challenging European level, but only on the lower Swiss level, and the problem of transnationality is largely a secondary phenomenon. Interculturality is central to the project. The HLS is published in three separate full-length editions (German, French and Italian) which are almost identical in their content, as well as in a two-volume Romansh abridged edition. On 21 October 2013, we presented the twelfth volume (consisting of three further books) to the public in Italian-speaking Switzerland. Thus, 12 of the 13 volumes – i.e. 36 plus two volumes of the LIR [Lexicon Istoric Retic] – have been published to date. It is envisaged that the hardcopy publication will be completed in the coming year with the publication of the thirteenth volume. The content of the articles (without images) has been available free of charge for the past 15 years online on the so-called e-HLS. We already adhered to the principle of "open access" before this term had even been coined! In its 36,000 entries (biographical entries and entries on individual families, places and topics), the HLS deals with the history of Switzerland from the appearance of the first humans up to the present and is based on the histoire totale approach. Most of the entries are very short, but a small number are longer and comparable in length to EGO articles (for example, the entries on the individual cantons and other large thematic entries).

However, the focus is not restricted to Switzerland. We include entries on all countries that have a connection with the history of the Swiss people, as well as on many regions and places which played an important role in the history of Switzerland, particularly those in neighbouring countries (for example, on the city of Mainz and on foreigners who were important in Swiss history, such as Lenin or Elisabeth of Austria). This is our modest contribution to transnational history writing. It is a difficult and daunting undertaking, as all of you involved in EGO will be all too aware! The national perspective influences the depiction of history more that we would have imagined. A good example are the famous Valtellina murders of 1620, during which the Catholic, Italian-speaking inhabitants of Valtellina rebelled against the German-speaking, predominantly Protestant nobility of Graubünden. The Italian author of the Valtellina entry depicted the event as a political and social rebellion of the oppressed Valtellina population against the German-speaking nobility, while the German-speaking, Protestant Bünden native who wrote the Valtellina murders entry described the event as an anti-Protestant atrocity of the Counter Reformation which was orchestrated by Milan and Madrid. One would think that two separate events were being described instead of the same event. It was only possible through dialogue to make the entries correspond to one another at least to the extent that they no longer totally contradicted each other.

However, our great challenge is trilinguality and quadalinguality, that is, interculturality. We translate articles in nine different directions of translation. We have noticed that the task is made considerably easier by the fact that we "only" deal with Swiss reality, and political, legal and social conditions have undergone considerable convergence across the linguistic divides over the past 500 years. It becomes more difficult when there is a combination of intercultural (linguistic) and transnational aspects. Thus, entries on neighbouring regions of France present greater difficulties to the German-speaking and Italian-speaking editors than the entries on French-speaking Switzerland. Even within the Swiss context, practically unsolvable problems repeatedly arise, especially when one goes further back into the historical past. Legal history in particular causes us regular headaches. There are two main reasons for this. Either a historical reality existed only in one linguistic region or the historiographies of the individual linguistic regions have dealt with a topic in completely different ways. For example, the word Pieve refers to a kind of large parish, many of which subsequently became administrative entities, but they only exist in Italian-speaking Switzerland. Or to give another example, it required a veritable semantic somersault to translate the German entries on Stadtrechte and Landrechte into French and Italian because the French and Italian legal traditions are unfamiliar with these categories. The terse reference in the French edition states that "La Suisse latine ne connaissait pas ces catégories", and the Italian edition states that "Nelle regioni di lingua italiana non vi era differenza fra diritto territoriale e diritto cittadino". And there are many such instances. In such cases, we discuss the language-specific details in the respective articles, under the heading "Sprachrelevant". This is why the entries are not always 100 percent identical in the three versions. A second solution is to include parallel descriptions in a comparative way. For example, the literary history of Switzerland is dealt with in separate articles on German, French, Latin, etc. literature, and in the case of the Publishers entry, the entry is subdivided into separate sections on publishers in German-speaking Switzerland, in Italian-speaking Switzerland, etc. As a third solution, the editors sometimes summarize the contributions of two or more authors in a single entry. The participating authors then put their names to the entry jointly (so-called co-authorship).

In view of these difficulties, should one despair and give up on transnational and intercultural history? No! EGO has met the challenge, too. To produce a well-rounded account of the history of all of Switzerland, we apply a three-step model:

The result of this laborious approach is texts in the various languages which are comparatively well-rounded, of (hopefully) acceptable quality linguistically, and which – in our experience – are viewed on their "own" merits, even if some entries betray the fact that they are translations or are of a different historiographical tradition. I was asked to address in this commentary how translated contributions are received by the different linguist user groups, and, for example, if encyclopaedia entries written in German and translated into French are accepted by Francophones. In the case of the large quantity of small encyclopaedia entries, this is not an issue at all. We do not notice any difference in usage based on the original language of the entry. This is also broadly the case with the larger entries, though there are more complaints in relation to larger entries that they do not take account – or sufficient account – of aspects relating to one or other region or linguistic group. An unbalanced or selective description stands out much more in the longer entries.

I am aware that the method being applied by the HLS is expensive. It is only possible in a small country like Switzerland. I get dizzy when I imagine what it would involve if EGO had to be translated into all the European languages – but only that would make it one hundred per cent transnational and intercultural! Perhaps it might be possible to have the articles read by specialists from the individual – or at least the more important (including the peripheral) – linguistic region s during the revision phases in the future. The EGO articles could then be augmented and "rounded out" to make them more European, either by the author of the original article or by the EGO editors, or one could append the contributions of the experts to the EGO articles as independent statements – either as supplementary articles or as contributions to a discussion. This would bring us closer to fulfilling Mr Kontler's wish for a "comparative and transnational history".