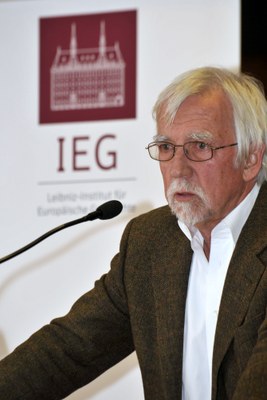 Professor Jürgen Wilke, Institute of Media Studies and Communication, University of Mainz. EGO editor for the history of media and communication.
The media are mentioned in a twofold sense in the aims of European History Online. Firstly, there is the subject matter. The project is supposed to focus on transfer processes, "that is, the dynamic interplay between system(s) of origin, mediating entity (or entities) (agents/media) and target systems".

Secondly, there is the formal, instrumental dimension, arising from the aim of utilizing the full potential of the internet as a medium. This in turn has two distinct aspects: the full potential of the internet is to be utilized in the preparation of articles, on the one hand, and in the formatting and presentation of articles, on the other.

I will summarize my observations on the implementation of these two aspects in 16 points. They are the result of a selective – that is, not complete – survey of the almost 200 original EGO articles published to date.

2. A fundamental problem with regard to the media focus is the term "media" itself. The definitions of this term vary considerably. In the humanities and cultural studies, it is often defined very broadly to include all kinds of sign vehicles and sign systems which communicate meaning. Marshall McLuhan even defined "media" as all civilizational arrangements which serve to compensate for human deficiencies (for example, the clock, the car, the railway, money). By contrast, the social sciences tend to work with a narrow definition of media; for them media encompass all the means and institutions used to disseminate statements to a multitude of people (for example, books, the press, radio, television, film and the internet). While the thematic thread European Media has largely adhered to this narrower concept of media – and one can also accept the sermon (particularly in printed form) as a medium – other articles hint at the broader concept of media. For example: "Nonetheless, in this context the cavalier’s tour, educational tour and Grand Tour are to be understood less as transfer media than as distribution channels". Though I must admit that the distinction being drawn here is not particularly clear to me. And in the article on the American Revolution, Benjamin Franklin is referred to using the phrase "The Ambassador as Medium".

3. Obviously, the media focus is not relevant to all of the topics dealt with in EGO. This is particularly true in the case of theoretical topics and in the case of historical subject matter that has no connection with media, at least in the narrower sense.

4. However, there are also historical topics which very much imply a focus on the media. If one enters the search term "media" in EGO, this currently (mid-October 2013) yields 66 results. A little over half of these are outside of the thematic thread European Media. On the whole, these only reflect the media focus to a small degree if at all, in my view. Some of them do not even justify a link to media articles in the narrower sense of the word. Only the article on Homeopathy contains a section devoted to the media. In the rest, the focus on the media tends to be peripheral. For example, the article on port cities in the early modern period discusses their importance as centres of information, but claims that printed information did not yet play a significant role as a main source of information. This contention is at least counteracted by a link to the article on News Distribution. The article Knowledge Transfer and Science Transfer contains only the cursory comment that "the communications media – writing, print, telecommunication, etc. – have profoundly affected the conditions of knowledge production and knowledge transfer, as well as the knowledge content". This is the extent of the discussion of the media in this article, and no link is provided. The focus on the media is also very thin in the article Mental Maps. The article does discuss travel literature, but does not mention newspapers (or in today's world media) reporting on other parts of the world. The article fails to recognise that media can be considered a source for the construction of mental maps. The situation is similar in the article Globalization, in which the phenomenon is discussed exclusively from the perspectives of economic history and technological history. The cognitive aspect, which could be researched by investigating the dissemination of international news, is not mentioned. There is not even a place in the text where a link to the article on European Media could have been inserted. These articles could have benefitted – and this is meant as self-criticism – from an intervention in the early stages of their preparation utilizing the collaborative capabilities which the online content management system offers (see below).

5. EGO is a system of units of knowledge, which is intended to utilize – and even make full use of – the capabilities of the internet. However, it remains contentious whether one can actually refer to the internet as a medium. Some authors prefer to speak of a "communication space" which encompasses various forms of usage and presentation, of which the World Wide Web is just one. If one wishes to define that which is specific to the internet, one has to make oneself aware of its properties: debordering, multimediality and media convergence, interconnectivity, interactivity, and also updateability.

6. The specific characteristics of the internet are even relevant to the production of the material which is placed in this communication space, as the potential for collaborative production is one such characteristic. Even during their preparation, articles can be subject to feedback. Assessment (also peer preview) is part of the EGO process. However, I have the impression that this discussion forum has not been utilized to the degree expected and intended. What are the reasons for this? There are probably multiple reasons: professional overburdening in the community which does not have the time to read and comment on the articles of others, trust in the competence of the editors and authors, perhaps also consideration for the feelings of others or reticence in this virtual, semi-public space.

7. The central benefit of online presentation is its interconnectivity and multimedia format. How does EGO utilize this? First of all, the texts are obviously of primary importance. These are discursive academic papers conforming to a specific encyclopaedic text format. In spite of some variation, there are a number of common features in the way the articles are structured, for example, they frequently start with definitions and the differentiation of specific classification grades. The multimedia elements very much augment and complement the texts but they are never more important than the texts.

8. EGO uses both internal and external links to interconnect the material. Internal links connect to other EGO articles. The concentration of these varies from article to article. Some articles have very few internal links (there are only two, for example, in Comparative History) and some articles have quite a lot (there are 30 in Cultural Transfer). One might assume that this variation is determined by the subject matter. This is indeed the case to a certain extent, though it may also result from inconsistency in how the function is handled. If too many links are included (and if one decides to follow all of them), it can also disrupt the flow of reading. Thus, there should also be a limit to linking.

9. External links are used more frequently in EGO articles, that is, links to other internet offerings or to material which the author has placed on the internet himself or herself. In general, links to standard sites – particularly the Virtual Internet Authority File (VIAF), a virtual international norm file for personal information – make up the bulk of these external links. Assuming an entry exists in VIAF, a link is supplied for every person mentioned in the EGO articles. Other standard links include the German National Library, and the General German Biography and New German Biography. The number of these links depends on the degree to which the respective EGO article focuses on protagonists. Some articles have more than 80 such links (e.g., the article Graecomania and Philhellenism).

12. The number and type of multimedia supplements that accompany the articles is determined by multiple factors, but primarily by the ability to find and access relevant sources on the internet. In many cases, the multimedia database Wikimedia Commons is cited as the source, though libraries, museum collections, web catalogues, digital documentation and other portals are also cited. The application of a fee for the use of a multimedia element is not necessarily a barrier, as the EGO managing editors have in many cases purchased the rights to images.

13. The multimedia elements are overwhelmingly static visual material, such as paintings, diagrams, caricatures, facsimiles, photos, and charts. In most cases, they have not been produced for the article, but have been taken from a secondary source. Only a small number of articles contain audio, film or television clips. This is due primarily to the fact that EGO covers the timespan from the early modern period to 1950. The intensive production of audiovisual material did not occur until after this period.

14. The multimedia elements in EGO are mainly traditional historical sources. They often include maps, emblems, drawing of buildings and artworks, portraits, visual representations and photos of historical events, facsimiles of printed works, but comparative little material copied from the periodical press. In some cases – though not often – articles contain infographics, which are currently gaining in popularity.

15. What about the function of the multimedia elements? In which cases – the organizers of this symposium ask – are these "primarily illustrative in nature, in which do they progress the argumentation?" This question can only be answered dependably by means of a systematic evaluation. On the basis of my selective reading, I get the impression that the multimedia elements in EGO mainly perform an illustrative function, such as historical maps, portraits of figures mentioned in the text, and pictorial representations of historical events. This is probably due in part to the process by which EGO came into being: authors submitted article texts and the EGO editors looked for suitable visual material to go with them. It is less often the case that the multimedia elements serve an evidential function which expands on the discussion in the text. This also applies to articles in which the illustrations are incorporated into the text and explicitly referred to in the development of the argument. An example of this is Wolfgang Schmale’s article Europe, in which the depiction of the emblematization of Europe is supported and expanded upon interpretatively using photos from the author’s own private collection.

16. The multimedia profile of the EGO articles is diverse and exhibits some differences. On the one hand, this profile is determined by the topic and subject matter of the individual article. Thus, maps are particularly common in the thematic threads Crossroads and Europe on the Road – both facsimiles of historical maps and maps which have been newly compiled to reflect particular points in history (such as, for example, the interactive maps of the Institute of European History). However, the topic alone does not account for the differences. The article Emigration across the Atlantic, for example, uses many photos, but the thematically related article Emigration does not. What effect different strategies of visualization have on the reception of the EGO articles is an open question.