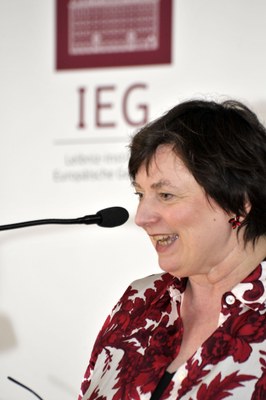 I must preface my remarks by stating that I am not a historian – literature is my area of expertise. Everything that I am about to say is no doubt conditioned by the traditions of my academic discipline, and by certain conventions which perhaps may not apply to other historical disciplines (I would therefore welcome an informative dialogue).

This question has already been addressed by Mr Trischler, so I do not wish to answer it in detail, but to refer directly to a number of points that Mr Trischler mentioned in his address. In view of EGO's aim of promoting the "interdisciplinary integration of international historical research on Europe", Mr Trischler poses the question, how successful has the project been in "mobilizing the specific perspectives of each of the disciplines relevant to historical research on Europe".

Mr Trischler gives a breakdown of the disciplines to which the specialist editors (the 23 currently engaged and the five formerly engaged) belong. 22 are historians; literary studies and linguistics are represented by four editors altogether; and music and media studies are represented by one editor each. He notes that the "varied spectrum of historical sub-disciplines is largely cover" (economic, social, scientific, medical, cultural, and gender history). He also notes that the humanities are predominant. The social sciences are hardly represented at all (neither sociology, politics nor psychology). Mr Trischler views this as a disciplinary boundary of EGO.

I do not entirely share this view. The general historical approach predominates, but aspects of the social sciences are dealt with. For example, the area of economics is dealt with – in the article Economic Networks by Christian Marx, for example. And while topics which extend into the areas of economics and politics are primarily discussed from the historical perspective, there is nonetheless an openness to approaches from the disciplines of economics and politics.

I would also like to discuss the second point referred to by Mr Trischler: "Is EGO a transdisciplinary project?"

For example, I have done some research on the extent to which topics appear in EGO which do not primarily belong to the discipline of history, but to – for example – literary studies or musical studies. I did a random test by entering some names and other search terms ("opera", for example). I found a number of short entries on individual composers. There is a short entry on Gioachino Rossini's Siege of Corinth http://ieg-ego.eu/en/mediainfo/gioachino-rossini-lassedio-di-corinto-giusto-ciel-in-tal-periglio in the article Graecomania and Philhellenism (with an accompanying music clip). Jean-Baptiste Lully is also mentioned briefly. However, there is (as yet) no detailed entry on the topics of "opera", "European opera" or "opera theatre" in EGO. Then I entered the search term "novel’" This yielded substantially more results than opera. Among other things, I found a relatively detailed article on Werther Fever, a short entry on Victor Hugo (with a picture) http://ieg-ego.eu/en/mediainfo/victor-hugo-180220131885-en, a very nice article on the Book Market, a photo of James Joyce http://ieg-ego.eu/en/mediainfo/james-joyce-188220131941-and-sylvia-beach-188720131962, and a photo of Thomas Mann with a short entry http://ieg-ego.eu/en/mediainfo/thomas-mann-187520131955-en.

As someone from the discipline of literary studies, I would have hoped for more in this area. Generally, I would have hoped for a greater integration of the subject matter of other disciplines, for example literary studies (authors, literary texts, etc.), musical studies and musical theatre history. The literary history of the cultural milieus dealt with and the interconnections between it and politics, social history and economics does not receive much attention. Composers, operas, and aspects of the social history of opera and of theatre also receive too little attention in my view. Of course, it would not be within the scope of this project to deal with literature and opera in a systematic and comprehensive manner. However, in particular periods and in the context of particular events, it would without doubt be useful to cross the disciplinary boundaries between objects of enquiry. For example, I am thinking of the importance of opera in nineteenth-century Italian history and also its role as a Europe-wide phenomenon, and of the emergence of bourgeois theatre in Germany from the end of the eighteenth century.

On the other hand, one must bear in mind that EGO has not been in existence for very long and is thus a work in progress. It is understandable that historical topics in the narrower sense are dealt with first of all, before the focus shifts to literature or music etc. After all, it is supposed to be a "history of Europe" and not an encyclopaedia.

What benefit do the participating disciplines derive from the concept of cultural transfers on which EGO is based?

I came to the following conclusions:

What specific perspectives do the individual historical disciplines bring to the collective endeavour of EGO (and which should they bring)?

It seems to me that various historical disciplines collaborate with each other in EGO, such as economic history, technological history, gender history, cultural history, linguistic history and others. All of these specific perspectives are represented and have been incorporated into EGO. The emphasis shifts from one disciplinary approach to another from one article to the next as the subject matter dictates. During my random reading in EGO, I did not identify any dominant historical discipline. Neither did I encounter an article which was so strongly shaped by a single discipline that the reader would require very specific specialist knowledge in order to understand the article.

In general, the various disciplines tend to merge and be subsumed into a general cultural history. In the article Italian Cuisine, for example, food is discussed to an extent as a cultural topic. Scientific (chemical, botanical and biological) aspects receive less emphasis, as do economic aspects. The article has a section entitled "Pizzeria and Osteria in Germany: The Spread of the Italian Restaurant after 1945". The topic of Italian cuisine is investigated from a cultural historical perspective, and this article is in my view a particularly good example of the process of cultural transfer.

In conclusion, I wish to say: